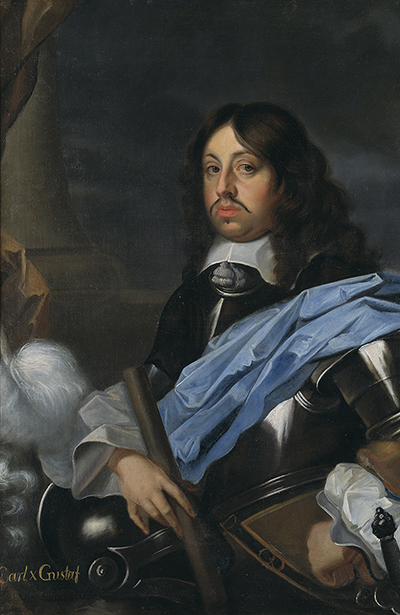 Karl X Gustav was the son of Gustav II Adolf's sister, Princess Katarina, and her husband Count Johan Kasimir of Palatinate. He grew up with Kristina. As an adult he sought her hand in marriage. Kristina declined, but arranged for Karl Gustav to become heir to the throne. She abdicated in his favour in 1654.

Karl Gustav married Hedvig Eleonora of Holstein-Gottorp in 1654 in Stockholm. They had a son, Karl (XI).

Karl X Gustav waged war for most of his reign. After a surprise forced march, he succeeded in bringing the Swedish army across Little Belt and Large Belt, both of which were covered with ice, thus threatening Copenhagen. At this stage Denmark surrendered, and after the 1658 Treaty of Roskilde Sweden reached its greatest territorial extent.

In God my destiny – He shall perform it